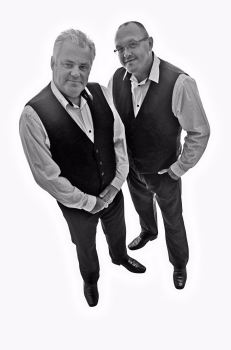 The S.A.S duo were formed in 2009 by Steve  Whale & Shaun Marx,
both accomplished professional entertainers in their own  rights.

Shaun Marx has been entertaining from a very
early age and has appeared in many bands both here and abroad as an experienced
drummer and vocalist .He has also appeared in many amateur dramatics productions
with his acting ability. His passion for music shines through at every function,
with his cheeky charm he will have the  crowd going in no  time.

Steve Whale has been entertaining since the
age of four, also an accomplished drummer, keyboard player and vocalist. Steve
performed with the Fiesta Steel Band for over 11 years as the drummer whilst
also touring the UK & abroad as a keyboard/vocalist solo act, and has been in many duos
along the way. He also worked for Haven holidays based at Weymouth Bay holiday
park where he gained so much more experience of  entertaining.


Together they bring a mix of superb vocal
harmonies all infused with comedy, costume changes and lots of audience
interaction to guarantee a fantastic  evening.

Steve & Shaun offer various shows to suit most budgets, and will always be happy to negogiate a suitable price for your event